Status of River Breakages in Middle and Lower Juba - October 2014 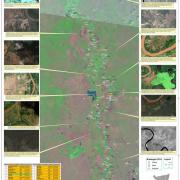 Despite a delay in acquisition of satellite imagery, SWALIM has finalised the mapping of River breakages along the Juba River as the Deyr rainy season advances. We hope this information will still be useful to assist communities in closing the open and potential breakages.

A table providing the river breakages within the two regions that require immediate attention is available on Juba River Breakages Table. There is one point that has been identified as an open river breakage and this poses an immediate danger and high risk of flooding. The open point is Madhooka in Jilib district. However, there are several potential breakage points which need to be monitored closely during the rainy season especially now that the river levels have been increasing drastically over the last few days.

A map of river breakages has been produced at a large scale and hard copies can be obtained from SWALIM offices. The map can also be downloaded from Juba River Breakages Map.