Land degradation is a gradual, negative environmental process accelerated by human activity, which lowers the productive capacity of land. Due to its gradual and subtle nature, in the initial stages it can go unnoticed for long periods of time. When it reaches its final stages, observable features are manifested, such as gully erosion, widespread vegetation colonisation by alien species, a

nd agriculturally ‘exhausted’ soil. Traditionally, only these observable features have been used as indicators to prompt control measures. Unfortunately. the control actions at these advanced stages often fail, in part because they become prohibitively expensive. Better and timely information about the development of the process is the key to land degradation control. FAO-SWALIM has carried out a national assessment in Somalia to establish the types, extent, and causes of land degradation in the country (see SWALIM’s Technical Reports No L-10 and No L-14). SWALIM also studied several control efforts carried out by Somalis and their development partners, documented opportunities for upscaling successful control measures, and made recommendations for implementing land degradation monitoring in the country.

Assessments by SWALIM have revealed that for the period 1980 to 2009, the most prevalent types of land degradation in Somalia were loss of vegetation, topsoil loss, and the decline of soil moisture. Loss of vegetation comprised of loss of vegetation composition (species) as well as cover. The assessments found the central and north-east areas of Somalia are most affected by loss of vegetation cover. These areas had a net cover loss of  37%         High resolution satellite image of gully erosion          between 1982 and 2008 - which translates into approximately 1.4% per year. Other areas were losing vegetation cover at an average rate of 0.6% per year. In terms of species loss, north-west and south Somalia and the area along the coast of the Indian Ocean were the most affected. These areas were afflicted with invasive plant species, which were replacing the original vegetation. Some common invasive species included Parthenium weeds (Kelig 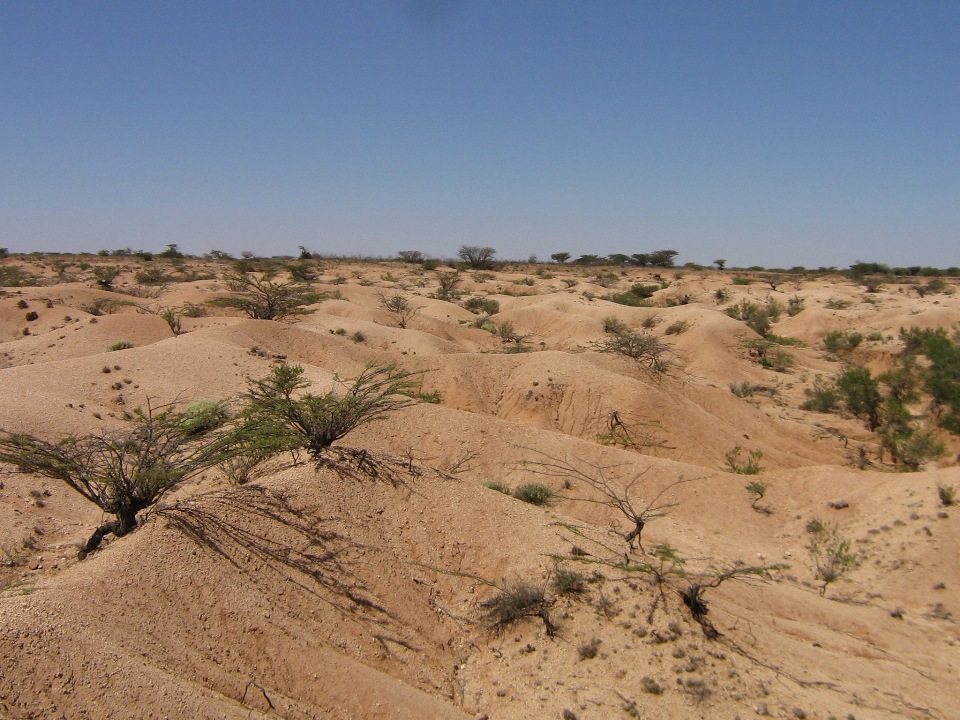 These invading plants have been replacing many high quality and palatable plants, have high seed production capacity and adapt easily to a wide range of climatic and soil conditions. Although Prosopis can be used in stabilising sand dunes and bare lands, for example, the invasive plants destroy natural pasture, displace indigenous trees, and reduce the grazing potential of rangeland.

The causes of land degradation can be divided into two groups: direct and indirect. Direct causes include human activity directly exerting pressure on land resources. In Somalia, according to the study by SWALIM, these activities include overgrazing, tree cutting (for fuel wood and charcoal production), and poor agronomic practices. Some of the poor agronomic practices observed include down-slope tillage and burning of animal manure (instead of incorporating it into the soil). Other causes were the limited use of soil and water conservation practices in crop-production areas and the failure to maintain land degradation control infrastructure. Factors behind the direct causes – such as land tenure, illiteracy, poverty, war and conflict, weak governance, and high population density, are considered Indirect causes.

A report establishing baseline information on land degradation for future monitoring, which also identified local spots with increasing trends of land degradation, is available in the publications library (Land Degradation and Monitoring Framework in Somalia - Report No. L-14). The report also describes the prevalent land degradation types, their causes and impacts, and sustainable land management practices to combat land degradation in Somalia. In addition, SWALIM has produced a report on detecting and monitoring the illegal charcoal trade, which is a major source of income for Al Shabaab and other armed groups.