Somalia experiences two types of flooding: river floods and flash floods. River floods occur along the Juba and Shabelle rivers in Southern Somalia, whereas flash floods are common along the intermittent streams in the northern part of the country. In the recent past, the country has experienced an increasing severity and frequency of floods. The historically most recent severe floods were those of the Deyr in 1961, 1977, 1997, and 2006, and the floods of the Gu in 1981 and 2005. These floods resulted in human casualties and major economic damage.

Whereas flash floods in Somalia result from localised rains, river flooding along the Juba and Shabelle rivers are primarily due to drainage from catchment areas located in the Ethiopian highlands, which normally experience heavier and more frequent rainfall than what occurs in Somalia. The flooding is worsened by illegal openings on the river embankments (made to create outlets for irrigation water during the dry season). Water coming out of the river through these openings during high river flows cause havoc to the adjacent land. 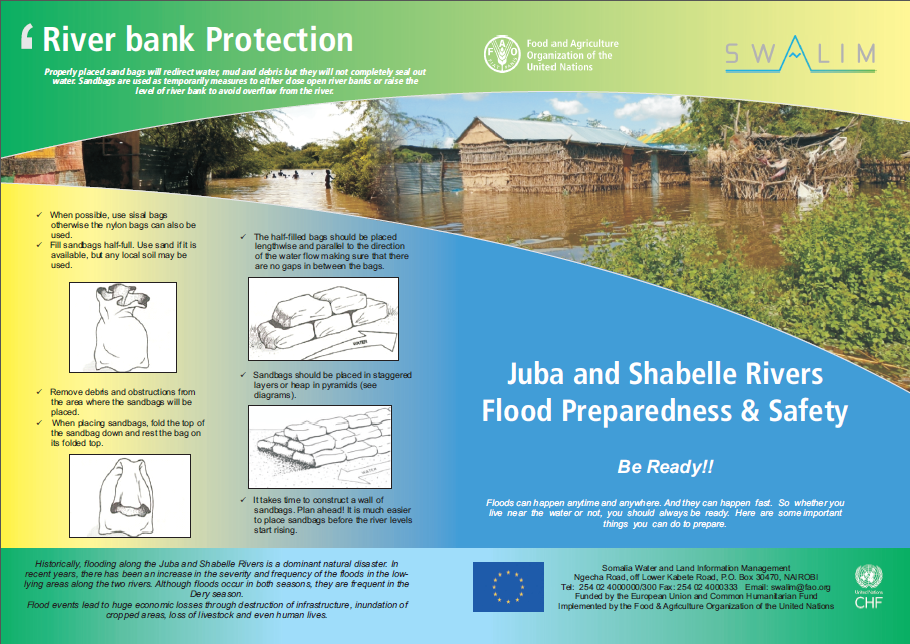 operations. In addition, SWALIM completed mapping of riverbank breakages and areas of potential flooding along the Juba and Shabelle Rivers in southern Somalia in 2014 using high resolution satellite images. The information produced played a crucial role in assisting local authorities and communities in both closing the open breakages and monitoring potential new ones. The information is used by partner agencies for disaster preparedness in the two rivers.

To assist communities to better prepare themselves during floods, SWALIM has published a flood preparedness information bulletin available in both English and Somali languages. The leaflet gives important information on actions to take before, during and after a flood that will help in reducing the impact of the floods and better equip communities to deal with flooding incidents.