SWALIM Early Warning Activities During the El Niño Event The El Niño climate phenomenon of 2015 was predicted to be one of the strongest and most destructive in history (see SWALIM Newsletter Update 9 of May-August 2015). In anticipation of the potentially dire effects in Somalia, SWALIM worked hard with development partners and Somali authorities to mount an unprecedented campaign of preparedness. Unlike in previous years, when floods caused death and devastation on farmland, infrastructure and facilities such as schools, the situation was different this time round - with most destruction averted following the early actions undertaken. While the more extreme El Niño predictions were not born out in Somalia, a large part of the reason for the limited damage recorded was due to the timely efforts of SWALIM and partners. During the build-up to the expected heavy rains, SWALIM became a hub for inter-agency co-ordination of all El Niño early warning and preparedness activities in the county.

Through the SWALIM information systems, communities were warned well in advance about impeding floods and were thus able to stay out of danger. Before and during the season, SWALIM distributed information packages pointing out dangerous situations to avoid and also advising about issues like the importance of protecting river banks. About 8,800 SMSs were disseminated and over 3,000 copies of flood preparedness brochures were distributed within the vulnerable communities along the Juba and Shabelle Rivers. The information campaign not only helped to prevent massive economic losses, but also saved lives. SWALIM enhanced the existing early warning system to include an SMS alert system, called Digniin (from a Somali word meaning “warning”). Digniin (see box on page 10) permits observers across Somalia to report El Niño-related incidents via telephone messages. The messages received from these observers and other relevant information is then structured, verified and, if appropriate, relayed as an alert to vulnerable communities in near-real-time. In addition to the Digniin, SWALIM distributed early warning information through e-mail, radio and its live web page of flood information.

Preparedness through Remote Monitoring of River Breakages SWALIM routinely monitors riverbank breakages and areas of potential flooding along the Juba and Shabelle Rivers in Somalia. In July 2015, SWALIM used satellite images, combined with field observations, to identify weak points along the rivers and shared this information with development partners, local authorities and communities. In connection with the El Niño Preparedness Action Plan, this information was used to select 72 open riverbank points along the Shabelle River where repair works were successfully implemented by FAO Somalia in collaboration with the Ministry of Agriculture of the Federal Government of Somalia. The repairs were later validated by SWALIM through remote sensing and field observations. The timely and well-targeted preparedness activities prevented disaster in many areas, especially along the most vulnerable parts of Middle and Lower Shabelle regions. Analysis of recent satellite images confirmed the reduced flooding, mainly along the portions of Shabelle River embankment where FAO helped organize interventions. Further analysis comparing two images of flooded areas in Jowhar in May 2015 and in January 2016 show a reduction of 43% of flooded agricultural land. Considering only the maize yield in Shabelle Region during the last Deyr season, reduced losses could be translated into an estimated 6.7Million USD savings. “Information for Action” Helps Build Community Resilience The early warning systems deployed during El Niño event helped to address a major shortcoming of natural disaster management: the weak link between early warning and early response to needy situations.

The success of the Digniin network was a good indicator of how collaboration between development agencies, national governments and humanitarian agencies can support effective response. further empowered local communities as the first responders to El Niño threats by establishing more effective community-based warning systems, organizing temporary labour opportunities to repair communal infrastructure and providing information and tools to mitigate losses at the household level. SWALIM also partnered with government ministries for a five-day training workshop on Disaster Risk Reduction (DRR) in Mogadishu during the month of October, 2015. The training held as part of the El Nino preparedness plan by FAO covered basic knowledge and skills on Disaster Risk Reduction (DRR), drought resilience techniques and drought risk management. Participants also learned to apply their knowledge to enhance resilience to drought and to prepare and respond effectively to drought risks. These efforts were made possible thanks to flexible and early donor funds, notably from the: United Kingdom Department for International Development (DFID), the United States Agency for International Development/Office for Foreign Disaster Assistance (USAID/OFDA) and Food for Peace (FFP), and the United Nations Central Emergency Response Fund (CERF). 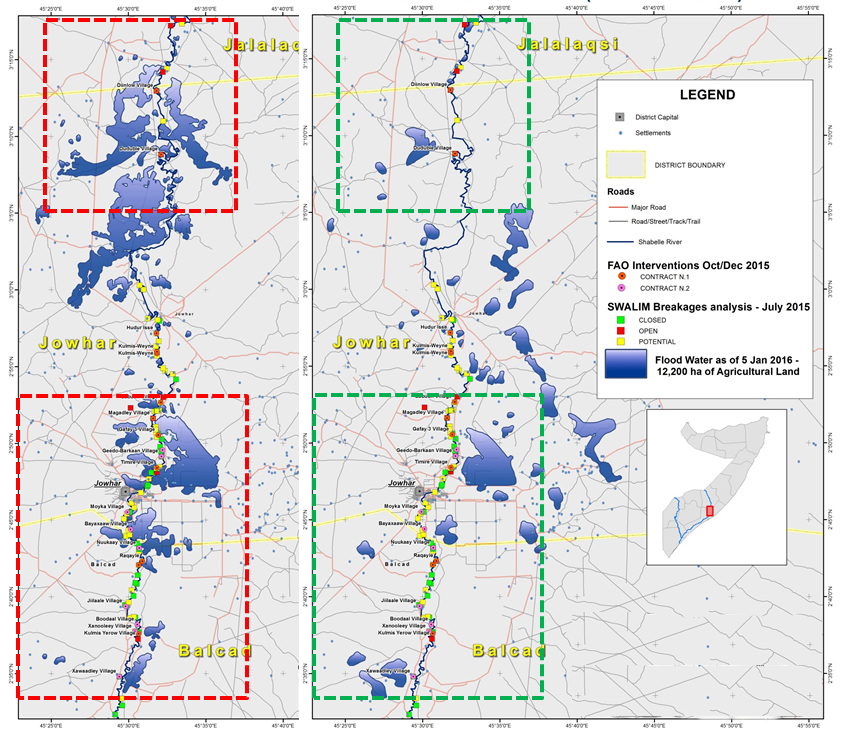