The Food and Agriculture Organization’s Somalia Water and Land Information Management (FAO SWALIM) Project, has finalized the analysis and mapping of the river breakages along the Juba and Shabelle rivers using very high resolution satellite imagery. Breakages identified in the map have been classified into five different categories; Open, Overflow, Potential Overflows, Potential breakages and Closed with sandbags. A legend/Key for further explanation of the different types of breakages is provided here.

The heavy rains during the Deyr 2019 rainy season led to increased flow causing overflow and riverbank breakages in sections of the two rivers. Henceforth, there was an increase of the open points from the previous assessment of August 2019.

A total of 152 Open points have been identified, 100 on the Shabelle River and 52 on the Juba River which require immediate attention. Several other points, which are either potential or temporarily closed with sandbags, have also been identified.

The Gu 2020 rainfall outlook is calling for enhanced rains within the Juba and Shabelle Rivers as well as the Ethiopian highlands. Consequently, river levels are expected to increase with a high likelihood of flooding especially where open and potential points have been identified.

There is therefore an immediate need to close the open points and reinforce areas where there are weak river embankments. Intervening agencies are advised to take advantage of the current dry period until the rains start and carry out temporary or long term measures to close the river breakages. This will see a reduction of riverine flooding in case of heavy rains and consequently a massive reduction in economic losses to the country.

SWALIM is pleased to share with you maps and tables of the status of river breakages along the two rivers. Hardcopies can be obtained from FAO SWALIM offices. The maps can be downloaded from the links below;

It is worth noting that the methodology is biased towards Remote Sensing (RS) interpretation with only limited “ground truthing” due to constraints in accessing the areas. Open breakages and overflows might have been omitted or classified as potential in some cases where satellite images were not available or may not have been very clear due to heavy cloud cover and dense vegetation cover. 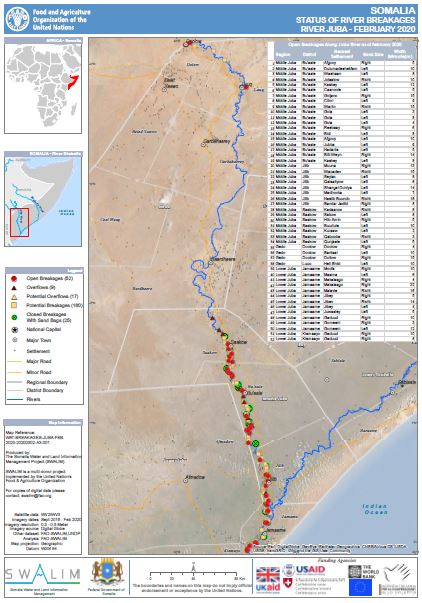