Outside of the narrow riverine areas of the Juba and Shabelle rivers, where surface water is available throughout the year, groundwater is the main source of water for domestic and livestock use in Somalia. In addition to these domestic uses, limited irrigation using groundwater is carried out in some parts of the country, requiring good management of the vital resource for sustainability.

Hydrogeological investigation prior to drilling, and continuous monitoring of the functional aquifers, are the keys to proper groundwater management. Unlike surface water, where physical measurements on water quantity and quality are easy, groundwater poses many challenges, especially in locating potential aquifers with a good quality and quantity of water. Accurate information is needed, which all too frequently is missing in Somalia. As a result of this information scarcity, some borehole drilling has been done without adequate research and in an unregulated manner, leading to dry or very low-yielding boreholes.

In recent decades, the population in major towns in Somalia has continued to rise, exerting pressure on the existing water infrastructure. The demand has almost doubled in the last ten years, yet this is not matched by an equivalent expansion in the water supply network. In rural areas the water demand for livestock and irrigation has also increased as farmers strive to produce enough food to meet the demands of both local and export markets.

To meet the increasing need for water, the water utility companies in major towns, and the water committees in villages, have been compelled to prolong the daily hours of pumping. Some boreholes are pumped for up to 23 hours a day, with one hour off to allow the generator to cool down. The boreholes hardly have time to recover before the pumps are switched on to continue with the supply. This has resulted in a continuous drop of the water table, especially  low-yielding aquifers. Borama Town, for example, experienced a significant drop in their water table in the 1980s; and in the last year, two of the functional boreholes have dried out completely, putting the water supply of the expanding town at serious risk.

Following a hydrogeology study carried out by SWALIM in the northern regions of Somalia, it became clear that the water supply systems in the major cities of the region were under stress and those aquifers were at risk of being depleted. It was therefore recommended that groundwater monitoring equipment be installed in the aquifers (starting with those from which the urban areas get their water) for long-term monitoring and early detection of over-exploitation. As a result, eight groundwater monitoring systems were procured and installed in key cities in the region: Hargeisa, Borama, Berbera and Burco in Somaliland, and Garowe, Galkayo, Bossaso and Qardho in Puntland. The installed equipment was recording water level and temperature at six hour intervals, and required regular visits to the station to manually download the data.
The installed monitoring systems have been operated by the Government Water Authorities from the two regions, in collaboration with the water utility companies in the respective towns. SWALIM provided technical support. However, after some time in continuous operation, the maintenance and data downloading missions became too expensive for the Water Authorities to sustain. And most of the installed equipment also started failing due to wear and tear, aggravated by the hot and saline water conditions in many groundwater sources in Somalia.

With the logistical challenges threatening the sustainability of the manual groundwater monitoring stations in Somalia, and given the importance of groundwater monitoring, SWALIM adopted an alternative approach which requires less maintenance and minimal visits to the installed location. This approach, based on telemetric systems, would also reduce the running costs for the Water Authorities and potentially provide more reliable and regular data. Eventually six telemetric systems were installed, where the groundwater monitoring equipment would acquire and transmit data automatically without human intervention. The procured stations, which record water level, temperature, salinity and Total Dissolved Solids (TDS), and transmit data remotely via Iridium satellite to a server, were to be installed in Hargeisa, Borama, Berbera, Garowe, Bossaso and Galkayo towns in July 2016.

Data recorded by the telemetric stations is transmitted to the SWALIM server every day. The data is archived in SWALIM’s Data and Document Repository, and at the same time made available to our partners through the SWALIM website.

The Government Water Authorities in Somalia are expected to benefit from the near real time data coming from the groundwater monitoring stations to keep track of the fluctuating water levels in the functional aquifers, allowing them to detect alarming trends in good time and take remedial measures to avert any crisis in water supply.
The focus is now on the southern regions of the country which were not previously covered by the monitoring network. For a start, one station is planned for installation in Mogadishu before the end of this year. To have greater impact, however, more stations need to be installed in the region. 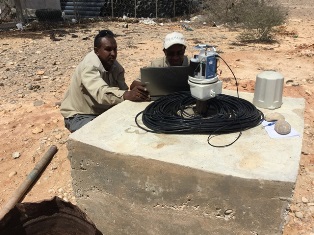