Following analysis of the latest suitable satellite images, some as recent as last week (September 17th), SWALIM has released updated information on the state of the Juba and Shabelle Rivers in advance of the Deyr seasonal rains, which are expected to commence by mid-October (in about three weeks’ time). As the data shows, there are a significant number of breakages or potential breakages in the embankments, giving rise to flood risks should the rivers rise rapidly.

The FAO’s Somalia Water and Land Information Management project (SWALIM) monitors riverbank breakages and areas of potential flooding along the Juba and Shabelle Rivers in Somalia on a routine basis. Monitoring is carried out using the available very high resolution satellite images not affected by cloud cover - combined with field observations where feasible. The purpose of this work is to identify weak or broken points along the river embankments where water could easily escape the river channel to adjacent lands, causing floods. Timely and well-targeted preparedness activities can prevent disaster in many areas, especially along the more vulnerable parts of the Middle and Lower Shabelle.

Regular breakage monitoring starts about a month before the rainy seasons begin in mid-October (Deyr) and April-May (Gu). The identified open/weak points along the two rivers are communicated to development partners, local authorities and communities for early action, hopefully before the onset of rains, to rehabilitate the embankments. The monitoring then continues during the rainy season and stakeholders are notified of new breakages developing as the rivers rise.

Using current satellite images and field reports, SWALIM has now updated the status of the river breakages information, as of mid-September 2016. The observations were done based on latest-available satellite images. Seven (7) open breakages were identified along the Shabelle River, while the Juba saw as many as 63. Many other points have been identified as “potential” breaks, meaning they could easily be breached with high river levels and strong flows.

Compared to the last comprehensive report, prior to the Gu rains, the Shabelle is seeing far fewer breakages this time around, down to 7 from 19 in February. This may be attributable to raised awareness due to SWALIM’s continued monitoring and reporting, as well as increased interventions by various agencies (including FAO) to prevent floods along the rivers.

The Juba, on the other hand, has seen a significant increase in observed breakages this time around. From 23 breaks seen in February it has jumped to some 63 breakages now. SWALIM speculates that this could be attributable to increased agricultural activity in the area, with farmers breaking or deepening the breaks in the embankments to irrigate their fields. The rate of restorative interventions is also less on the Juba because some sections are not accessible to aid agencies for security reasons.

The images below show the effects of flooding from breakages in the river embankments of the Juba during the previous Gu season, in May 2016.

Full details on the current status of Juba and Shabelle riverbank breakages can found on http://frrims.faoswalim.org/rivers/breakages. 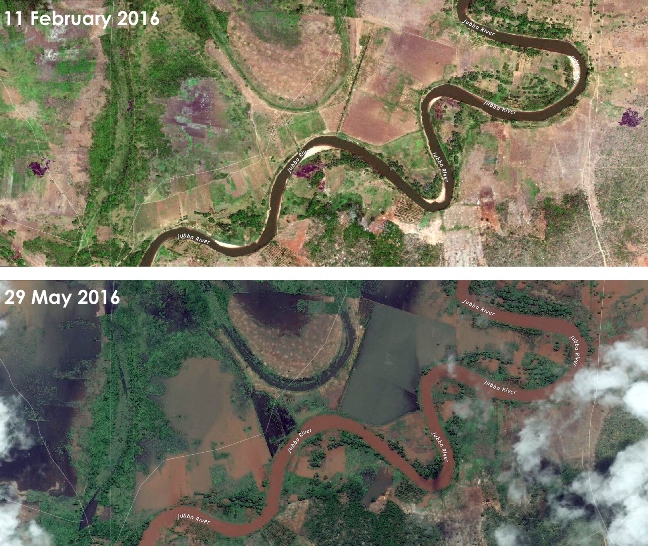